Monfils appears to be held together with sticky tape ?

Federer will have two beat two huge servers to reach the final: Anderson, then Isner or Raonic.

Kevin Anderson finally brings it to an end, winning in four sets against Gael Monfils to advance to his first Wimbledon quarter-final.

BREAKING NEWS: Gael Monfils fined for not taking Kevin Anderson to five sets. Wimbledon officials claim they had a deal with the Frenchman to prolong the match as much as possible in order to delay 12th seed Novak Djokovic’s match until tomorrow. 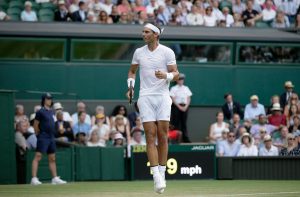 Will the world No.1 make it three #Wimbledon titles this year? pic.twitter.com/gGxPyIw8Nv

? into the #Wimbledon QF!

He’s two sets down against Juan Martin Del Potro, but he’s not giving up yet.

Juan Martin del Potro was close to finishing off Gilles Simon in straight sets on Monday evening. But the fifth seed will now return on Tuesday with a two sets to one lead.

Tell us who you believe will win ⬇ pic.twitter.com/dExOy9Ibwi

Time for rest, and then resume again tomorrow.

Novak Djokovic is in the quarter-finals after beating Karen Khachanov 6-4 6-2 6-2.

An excellent #Wimbledon continues for @DjokerNole…

The Serbian progresses to the quarter-finals and will face Kei Nishikori pic.twitter.com/AYhIqo8ygv

The quarter-finals await for @DjokerNole

The Serbian shows more than a few signs of the form that has won him #Wimbledon three times, defeating Karen Khachanov 6-4, 6-2, 6-2 pic.twitter.com/fuM0Q2nsN4