Home Inside Bridge KBA Tuesday Contest: Results of 2nd May 2017
Facebook
Twitter
Pinterest
WhatsApp
In the Tuesday Bridge Pairs Contest held at the Aslam Bridge Hall on 2nd May, playing some sparkingly aggressive match point Bridge, the highly volatile Muhammad Zubair in a makeshift partnership with the indomitable Anwer Qazilbash streaked past all other 13 contestants to attain the First position at 57.44%. It included the highest Top of the contest when Zubair made the 3NT Contract with 2 over tricks that was Redoubled by Qazilbash.
Close behind them at 55.67% was the Regular Pair of Gulzar Bilal and Farukh Liaqat who in a remarkable rearguard action managed the Runners Up Position after languishing at the bottom midway.
The third position at 53.87% was shared between 2 Pairs-Anwer Gheewala playing with Z.Qureshi and the unlucky pair of M.Rafique and S.M.Ilyas who after playing so well to be at the Top were finally toppled down in the last two rounds. 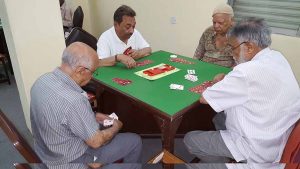 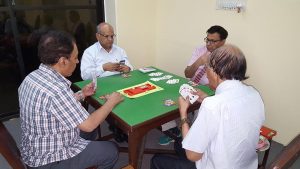 The next KBA Bridge pairs is scheduled at the Aslam Bridge Hall on Friday 5th May at 6 p.m.sharp.
The KBA Management in order to promote bridge especially among the young Pakistanis organizes weekly events in venues which include Karachi Gymkhana, Karachi Club, Defence Club or Golf Club or at Aslam Hall.