Scoring a double century in an ODI match was considered to be extremely difficult and at times, quite impossible. Many batsmen came close, top of which included Zimbabwe’s batsman Coventry and Pakistan’s opener Saeed Anwar.

The aforementioned players scored 194 runs and fell just 6 runs short of becoming the first batsmen to score a double century in ODI cricket.

But with the passage of time, like other cricket records, this milestone was also breached. And, quite interestingly, all are/were opening batsmen in their respective teams.

So, without further delay, we present the names of those few batsmen who have achieved this milestone at least once in their international career. 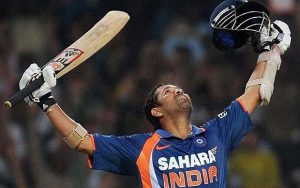 The 200 landmark was first broken by none other than India’s legendary batsman, Sachin Tendulkar. The ‘Little Master’ achieved this milestone in 2010 against South Africa.

This unbeaten innings of 200* runs comprised of 147 balls in which the opener struck 25 fours and 3 sixes. Furthermore, this record breaking score helped India to post a total of 401 runs in 50 overs.

Throughout his entire career, Virendar Sehwag had been labelled as an aggressive batsman. This is why it did not come as a surprise when he became only the 2nd Indian player, after Tendulkar to score a double century in an ODI match.

This knock came back in 2011, when Sehwag smashed 219 runs against Windies at Indore, India. His innings comprised of 25 fours and 7 sixes and it took him only 149 balls to achieve this milestone.

Virendar Sehwag got out in the 47th over and had it not been the case, then the opener would have scored the first ever 250 in ODI cricket.