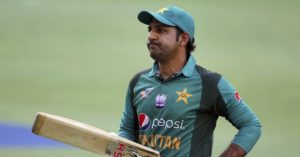 Sarfraz Ahmed has offered his “sincere apologies” to anybody he may have irritated with his on-field remarks amid Tuesday’s ODI against South Africa.

The Pakistan captain and wicketkeeper was grabbed by the stump microphone making comments that could be translated as racist, with all-rounder Andile Phehlukwayo on strike at the ideal opportunity for the Proteas.

Sarfraz posted a conciliatory sentiment on his official Twitter account on Wednesday, while clarifying his words were a declaration of disappointment and not coordinated towards any person.

South Africa won at Kingsmead by five wickets, leveling the five-coordinate arrangement at 1-1. The groups next meet at Centurion on Friday.

1/2 – I wish to extend my sincere apologies to any person who may have taken offence from my expression of frustration which was unfortunately caught by the stump mic during yesterday’s game against SA. My words were not directed towards anyone in particular and…

2/3 – I certainly had no intention of upsetting anyone. I did not even mean for my words to be heard, understood or communicated to the opposing team or the cricket fans. I have in the past and will continue in future to appreciate the camaraderie of my fellow cricketers from…

3/3 – …across the globe and will always respect and honour them on and off the field.

Racist comments from Sarfraz about Flukewayo? Nothing surprising tbh. The amount of shit Asian players get away with speaking in local languages as opposed to the English speaking sides is quite ridiculous.