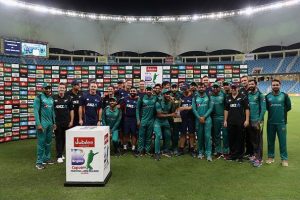 Pakistan and New Zealand shared the crown jewels in the third ODI after the match was deserted because of bad climate. The 3-match series stayed level at 1-1 and both the groups shared the trophy. Prior, Pakistan chief Sarfraz Ahmed won the toss and chose to bat in the definitive third one-day worldwide against New Zealand on Sunday.

Fakhar Zaman scored his fifty, his second continuous one in the series, before being expelled by Colin de Grandhomme. Babar Azam played beautifully, however passed up on his hundred, as he was expelled on 92 by Trent Boult.

Series draw 1-1 as the 3rd ODI gets abandoned due to rain! ?This was a great chance for Pakistan to win ODI series against New Zealand after so long! #PAKvNZ

Lockie Ferguson finished with five wickets with 3 of his wickets coming in the last over of the innings. Pakistan achieved 279/8 out of 50 overs to set New Zealand with a steep total of 280 runs.

New Zealand could just bat 6.5 overs, as bad weather ceased play for the last time, and eventually the match was washed out.

18-year old quick Shaheen Shah Afridi has been called up to Pakistan’s 15-man Test squad for the up and coming 3-match test series against New Zealand in the UAE, while Shadab Khan and Fakhar Zaman have not made the cut.

Shaheen Shah Afridi was called up to the Pakistan Test squad for the first time earlier today.

Here he is taking wickets for fun at the ICC Under-19 World Cup earlier this year.