This is the last match of Premier League, Match Day 5 of 38. The highlights are appended below the points table.

Match 10 of 10: Southampton vs Brighton 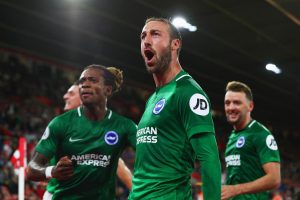 If I were a Southampton fan, I think I’d already be very tired of Mark Hughes’ constant blame-deflection and moaning. Nothing’s ever his fault, is it? We’re very lucky to have Chris Hughton at #bhafc

I was having a go at the attempts Southampton are making to create an atmosphere with paper clappers, you’ll not hear any arguments from me about what you are saying.

Danny Ings has 3 goals in his first 5 PL games for Southampton, I’m glad he’s doing very well since asking for regular first team football we couldn’t give. Relieved that he can’t play against us, hope he stays fit and continues scoring.

Very similar match to West Ham v Bournemouth although, we nabbed the win on that occasion. Do love a comeback and do love a bit of Southampton misery

Congratulations to @dannykidd123 you are the winner of the Southampton v Brighton giveaway I’ve sent you a DM with the details well done & thank you to everyone for entering ??? pic.twitter.com/g0cUqSFue2