This is the first three matches of the Premier League, Match Day 20 of 38. The match highlights and the top 10 teams points table is included.

Match 1 of 10: Everton vs Leicester City 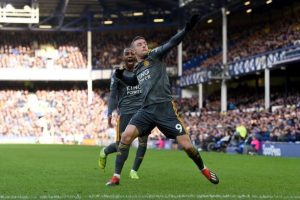 Everton went down to a single-goal defeat in their opening game of 2019, with Jamie Vardy’s 58th-minute goal banking all three points for Leicester City.

22 – Jamie Vardy has scored 22 Premier League goals for Leicester City under Claude Puel – double the number of any other Foxes player in that time. Somersaults. pic.twitter.com/ZScIJUMiTd 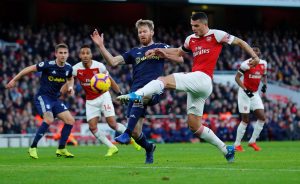 Pierre-Emerick Aubameyang has now scored 14 goals for @Arsenal this #PremierLeague season, as many as the club’s PL top scorer in the entire 2017/18 campaign (Alexandre Lacazette) #ARSFUL

It’s a big moment for @BukayoSaka87 who makes his @premierleague debut ?

Alexandre Lacazette has been directly involved in 30 Premier League goals from Arsenal:

Auba in the @premierleague this season:

Match 3 of 10: Cardiff City vs Tottenham

Spurs continue their #PremierLeague dominance as they cruise by @CardiffCityFC 3-0.

Tottenham are second in the league standings 6 points behind Liverpool.

Tottenham seal the win in the first fourty-five minutes. First-half goals from Kane, Eriksen and Son set Spurs on course for victory. Spurs bounce back from their defeat to Wolves and prepare to face Manchester United. #PremierLeague #CARTOT pic.twitter.com/59RnNDZBjr

In reality, it’s quite something that @SpursOfficial are on the heels of the Premier League’s finest, given the vast difference in expenditure between them and @LFC and @ManCity. Punchettino.

17 Dead In Stampede Before Football Match In Angola