These are the last four matches of the Premier League, Match Day 14 of 38. The highlights are appended below the points table. 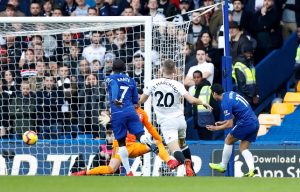 Just been on that google thing an even though Everton won the premier league against Chelsea in a 0-0 #SuperThriller they seem to be 14 points behind the Mighty Merseyside Reds of Liverpool Soccer FC pic.twitter.com/Mseo0ynxTs

N’Golo Kanté has now bettered his best tally for goals and assists for Chelsea in a single Premier League season:

This is Premier League ? pic.twitter.com/kYcScroxdi

1 – Chelsea have only lost one of their 26 Premier League matches against Fulham (W15 D10), a 0-1 defeat in March 2006. Assertive. pic.twitter.com/vyNSJvVzwy

Chelsea vs Fulham thoughts
1. We need to see more of Ruben Loftus Cheek- one of the finest dribblers in our team and can shoot from outside the box
2. It’s time Emerson starts in the Premier League.
3. If fit, Pedro over Willian. #cfc #epl

As a Man United supporter, the only good thing about this premier league weekend were the Pride captain armbands. pic.twitter.com/KDBoHtbTdt

DAY 2 – In the 16/17 season, Kanté became the first player in Premier League history to win back to back league titles with different teams in two full seasons (Leicester and Chelsea). Historic. #NGoloStuff pic.twitter.com/T2I6PzHyC9

Match 9 of 10: Arsenal vs Tottenham 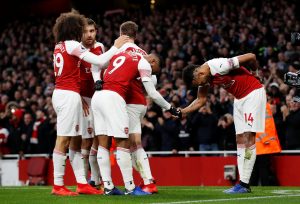 The Gunners score three second-half goals to come from behind and win a pulsating north London derby#ARSTOT pic.twitter.com/epnFgSnBA0

His first goal for Arsenal was in the North London derby

He’s what the club have been looking for, for a decade – a DM that can change the game offensively, and cost just £26m

Lucas Torreira has been named Premier League Man of the Match in three of Arsenal’s last four games:

What a signing he has been. pic.twitter.com/kObJME1s2H

#arsenal is still the boss of north London！#ARSVSTOT #Derby
if #TOT want to replace #arsenal at least they should win a single valuable champion. ?It seems that #TOT never won a valuable #champion in 21th century??#lmao #Premier_League lol.#TOTnochampion pic.twitter.com/4EkX7L4Tar

1000 – Pedro’s strike for Chelsea was their 1000th home Premier League goal, becoming just the third club to reach this landmark in the competition after Manchester United (1079) and Arsenal (1029). Noughties. pic.twitter.com/VBpgjleX4r

❤️ Lucas Torreira ❤️ To see him score his first goal for Arsenal, in the north London derby against the scum, was unbelievable. I had tears of joy in my eyes. This guy is more than just a defensive midfielder. Every club in the Premier League would love to have him in their team. pic.twitter.com/nMb0Tm2fQs

Wonder how they’ll play out Arsenal beating Spurs and Liverpool beating Everton on Premier League Years? Probably something about today being a red day

Congratulations on your first goal for @Arsenal in the premier league and there couldn’t have been a better time to get on the scoresheet ?

derby day was decent #WestLondonDerby finished with chelsea winning over fulham 2-0, #NorthLondonDerby ended in a thrilling 6-goal fest Arsenal thrashing Tottenham 4-2 and the #MerseysideDerby also ending in a thriller with a 1-0 win for Liverpool over Everton #PremierLeague #EPL

Match 3 of 10: Liverpool vs Everton 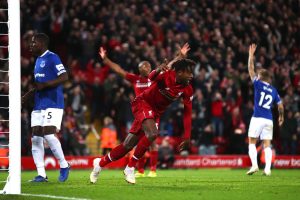 5 – @LFC have scored more 90th minute winners vs Everton than any side has vs another in Premier League history. Unbelievable. #LIVEVE

Liverpool have only scored 5 more goals than us in the Premier League this season, really proves how important it was for us to sign a qualify center back.

Liverpool have scored five 90th-minute winners against Everton in the Premier League:

More than against any other side in the competition’s history. ⏱ pic.twitter.com/RXnrNAUduo