This is the next match of Premier League, Match Day 7 of 38. The highlights are appended below the points table. 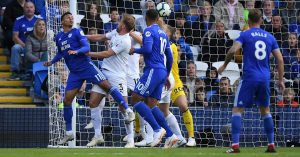 No disrespect to Cardiff City and Burnley, as a Newcastle supporter; you two along with us and Huddersfield Town are like that episode of The Inbetweeners where they’re trying to get into a party they specifically weren’t invited to.

280 – The first half between Cardiff and Burnley saw just 280 passes attempted, with a 59% completion rate; both season-low figures for a first half in the Premier League. Grind. #CARBUR

When the away team’s goalkeeper receives the Man of the Match award it says a lot about the home team’s possession and shots! ⚽?