This is the first match of Premier League, Match Day 8 of 38. The highlights are appended below the points table. 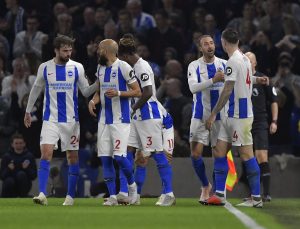 Friday night football! Buzzing for the Brighton boys.. hard to face a team when they’re on a good run like West Ham were, but 3 hard earned points in the bag tonight. Delighted with the 1st clean sheet of the season too ?? (@donhutch4 ain’t happy ?) #bhafc pic.twitter.com/SF96lPxyvz

12 – In 2018, the only Englishmen to score more Premier League goals than Glenn Murray (12) are Harry Kane (17) and Jamie Vardy (14). Clinical. pic.twitter.com/HrQgXWpsXD

Glenn Murray has three times as many Premier League goals in 2018 (12) as Alexis Sanchez and Alvaro Morata do. Between them.