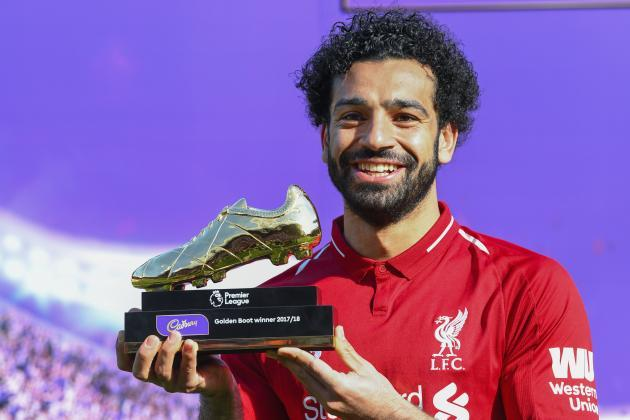 Mohamed Salah, the Egyptian king set up a great record by scoring 32 goals in just 36 appearances in the Premier League and was awarded the Golden Boot for this amazing performance.

Salah, hails from Egypt and is only 25 years of age, who currently plays for the Liverpool as his club and also represents Egypt as his national team. Recently, Salah won the FWA award

and has now added another award to his name i.e. “The Golden Boot”. Salah maintained his goal scoring ability with a ratio of 0.89 goals per match and scored a total of 32 goals in the Premier league to win this award from Harry Kane who ended with 30 goals. Harry Kane said that it’s great

to have such a competition between us. He also said that I personally wanted to improve my target and 30 was a good one. Mohamed Salah has never expressed himself as such a great and sensational player back in the days where he played for Roma. The Egyptian knew where the net was but never showed such performance. He also won the PFA award and added the Golden Boot to take his 2018 awards tally to three. Also, his total goals in all competitions have reached 44; A sensational effort so far. Salah has also become the top-scorer player with his first season at Liverpool, moving past Alan Shearer (1995 – 1996).

However, he is still short of three goals compared to Ian’s Rush record who scored a total of 47 goals in a single season for Liverpool from 1984-1984. Now Salah is looking forward for the upcoming Champions league final against Real Madrid. The final is scheduled to be held on 26th May and probably Liverpool will be eyeing Salah for another match winning performance.

What is Golden Boot ?

However, in Premier league the Golden Shoe award was introduced after a man named Carling settled a 12 million euro deal of four years which resulted in start of Premier League second season.

As the league ended, the top-scorer Teddy Sheringham was awarded with the first Golden Boot.

The award was also known as Premier League Golden Boot.

Golden Boot granted to the top scorer in the following leagues: