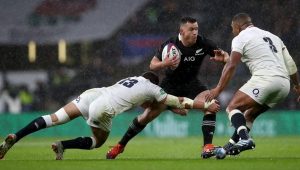 New Zealand clung to win a spine chiller by a solitary point after Sam Underhill’s late attempt was questionably precluded.

An attempt from the returning Chris Ashton following two minutes and another for captain Dylan Hartley off a roaring moving hammer had set up a merited 15-0 early lead.

Damian McKenzie’s attempt and Beauden Barrett’s boot taken it back to 15-10 at half-time, before Barrett’s drop-goal and penalty edged the title holders in front.

One of the proudest moments of my career to date, singing the New Zealand National Anthem at Twickenham! Well done All Blacks and England, it was a great game to watch – the lads hung on in the end! #AllBlacks #England #ABSVENG #Rugby #proudkiwi https://t.co/uusSH2Bnx6

Meanwhile, England hung in the challenge in repulsive conditions, and with five minutes to go celebrated as Underhill benefitted from a Courtney Lawes pursuit to jump into the corner.

In any case, TV replays demonstrated that Lawes had been partially offside, and the shot of just a second prevail upon the title holders in 15 years had gone.

It was a brilliant, tireless match, with mistakes all over however the pace persistent, and keeping in mind that Eddie Jones’ men were crushed toward the end, it was an execution from damage hit side to give heart with the World Cup not exactly a year away.

All Ive seen in the sports media this week is that New Zealand we’re playing England at rugby…and England were ready to pump them….I’m now not seeing anything about said game…what’s happened,was it can elled??