This is the first six matches of the Premier League, Match Day 12 of 38. The highlights are appended below the points table.

Match 1 of 10: Cardiff City vs Brighton 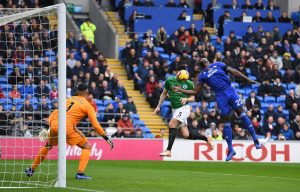 Super Eagles defender, Leon Balogun sat on the bench throughout as his club Brighton were beaten 2-1 by Cardiff City in a Premier League clash on Saturday.

Cardiff came from behind to win after stunning their visitors with a last-minute goal. #CARBHA pic.twitter.com/aUaijT6zpF

Neil Warnock is given reason to celebrate in his 100th game as Cardiff boss as Sol Bamba snatches a late winner against 10-man Brighton!

The Bluebirds are out of the Premier League relegation zone!#CARBHA pic.twitter.com/q8niLCz3G0

Neil Etheridge was in the starting XI as usual for Cardiff City Fc when they beat Brighton today in Premier League.
He is expected to travel to Philippines tomorrow to join Azkals squad in AFF Suzuki Cup match against Singapore on Tuesday

? “The ref asked if I took my shirt off and I said ‘no'”#CardiffCity‘s hero of the day Sol Bamba managed to escape a yellow card today after taking off his shirt after scoring the Welsh side’s winnerhttps://t.co/mhMQQL6r5O pic.twitter.com/7uZg6DcsUT

Match 2 of 10: Southampton vs Watford 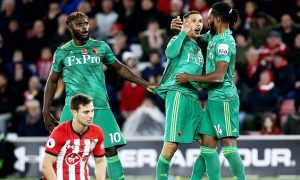 “It is a joke! We play in the Premier League – the officials have cost us two points!”

Fair to say @chazaustin10 was not impressed with the officials in Southampton’s draw with Watford: https://t.co/C6EMg2xej3 https://t.co/YYWfHGXACT

Southampton have failed to win any of their opening 6 home league games for the 1st time in the top 4 divisions of English football #PL pic.twitter.com/DpUqNs8VFS

Full list of teams Southampton have beaten at home in all competitions in the last NINETEEN months:

Michael Obafemi got another 4 minutes of Premier League football under his belt today for Southampton. 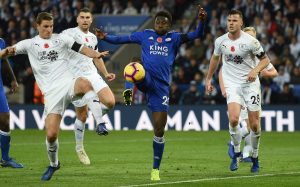 A rainbow emerges over the King Power for Leicester City’s first home game since Vichai Srivaddhanaprabha passed away ? pic.twitter.com/ZtzuqHTXPd

Leicester City’s players, staff, former players and former managers are now on the pitch showing their appreciation for your magnificent support.

Premier League round-up: Leicester say goodbye to Vichai Srivaddhanaprabha and Newcastle seal back-to-back wins It was an emotional afternoon for Leicester City in their first home game since the death of chairman Vichai Srivad… https://t.co/P4fuWOTp8c via @bdnews24 #talksport

#Leicester city fans pay tribute to #Vichai at the 60th minute as he passed away when he was 60 years old. All the fans picked up their scarves and vichai’s picture was displayed on the big screen.#LCFC #LeicesterCity #LeiBur #PremierLeague #PL pic.twitter.com/iCqHojx2TW