This is the first match of Serie A, Match Day 5 of 38. The highlights are appended below the points table. 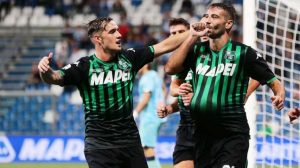 Nooooooooooooo. It’s the end of the road for the rolling acca. Frustrating as Wigan and sassuolo who were potential picks both won at better odds. Monaco were poor and didn’t deserve to win. We start again tomorrow

Sassuolo celebrate their win with their fans ??
They are currently second in the Serie A table ????#SassuoloEmpoli pic.twitter.com/NScEEqbj7Q

Another huge referee and VAR-mistake at Sassuolo’s third goal today. The ball has clearly passed the line before it’s crossed into Di Francesco who scored the goal.