These are the next four matches of LaLiga, Match Day 7 of 38. The highlights are appended below the points table.

Match 2 of 10: Real Sociedad vs Valencia

Valencia grab their first win in the LaLiga this season, and becomes the last team to register a win! 1-0 away to Real Sociedad is a strong result, though the performance is still not remotely what you’d expect. Kondogbia is still a beast in midfield, though.

Massive result for Valencia. Can’t underestimate the mental block that might’ve been lifted after such a win. 0-1, leading for a long time, away from home. Could kickstart their season.

Huge win for Valencia. Gritty stuff, but it doesn’t matter. Some useful rotation for Marcelino and Kevin Gameiro gets his first for the club. The return of Geoffrey Kondogbia encouraging.

Match 3 of 10: Barcelona vs Athletico Bilbao 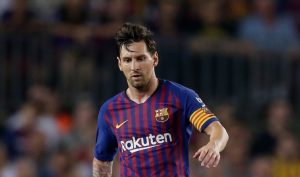 Barcelona: Have picked up just two points from their last three matches in La Liga – their worst run since April 2016.

Full stats and ratings from their 1-1 draw with Athletic Club — https://t.co/WbEjf4zOiT pic.twitter.com/pPM8b8M0zE

Real level on points with Barca after derby draw Real Madrid missed the chance to go two points clear of Barcelona at the top of La Liga as they drew 0-0 with Atletico Madrid on Saturday. https://t.co/sIaUL7ZUfQ via @bdnews24 #football

The wheels have come right of #Barcelona in there last 3 games. A 2-2 draw at home with Girona. A 2-1 loss to Leganes. An 85th-minute goal saved a 1-1 draw at home to Athletico Bilbao. Pressure will build on Ernesto Valverde especially after resting Messi & Busquets

‘Angry’ Messi demands better: Lionel Messi said Barcelona are “angry” and called for improvement after a 1-1 draw at home against Athletic Bilbao on Saturday. https://t.co/BS66VQ07fF pic.twitter.com/9Cn75dPMsh 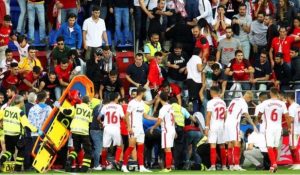 The away stand has collapsed at Ipurua during the Eibar – Sevilla game. Several fans received medical attention on the pitch.https://t.co/W6lAxygwOY pic.twitter.com/tdMYMxkwfz

That’s 17 (!!!) goals in the last 4 matches for the Andalusians! Unbelievable!

Krasnodar will be hosting a very in-form team Thursday! 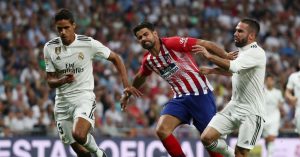 Barcelona and Real Madrid in La Liga this season pic.twitter.com/wIUsBAdWs7

Real Madrid failed to score in consecutive league matches for the first time since 2011. pic.twitter.com/5d9Vj21LYg