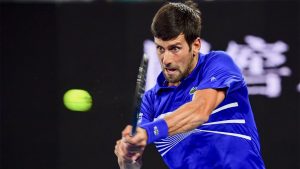 Novak Djokovic fixed his place in the third round of the Australian Open on Thursday, while Alexander Zverev got through a stern test against Jeremy Chardy.

Djokovic beat Jo-Wilfried Tsonga in straight sets however was not taking care of business as he set up a conflict with Denis Shapovalov.

Milos Raonic and Kei Nishikori advanced with triumphs over Stan Wawrinka and Ivo Karlovic, while Dominic Thiem resigned in the wake of feeling unwell in his conflict with Alexei Popyrin.

Alex Bolt pulled off an irritated against Gilles Simon, and the youthful weapons kept on awing, with Borna Coric among alternate victors in Melbourne.

World number one Djokovic needed to buckle down for his 6-3 7-5 6-4 triumph over Tsonga on Thursday.

In an engaging experience, Tsonga indicated looks of the ability that once observed him positioned fifth on the planet yet blended film industry shots with senseless mistakes as the more reliable Djokovic stopped away regardless of not being at the highest point of his game.

The six-time champion rebuffed Tsonga’s missteps to take a persuading scoreline from a match against a rival who seemed prepared to do more.

Easygoing tennis fans could be pardoned for not realizing bolt’s identity before the competition, but rather the Australian special case is becoming well known on home soil.

Seventh seed Thiem hauled out at 7-5 6-4 2-0 down to Australian young person Popyrin in the wake of requiring the coach refering to exhaustion.

A competition that began with one of the game’s best players reporting his looming retirement could yet be recognized as an achievement occasion for a portion of its most brilliant prospects.

Wins for Zverev, Coric, Shapovalov, Daniil Medvedev and Popyrin on Thursday mean 10 players younger than 23 have fit the bill for the third round.

That is the most in a fantastic pummel since the 2008 French Open and the most in Melbourne since 2004.

ICYMI: Jo-Wilfried Tsonga dials up around the net magic against Novak Djokovic for the @cpaaustralia Shot of the Day. pic.twitter.com/H7K4GgxHDE