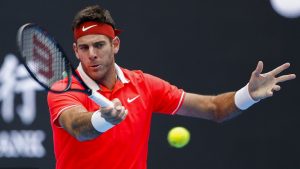 Juan Martin del Potro, marked a thumping victory over Serbia’s Filip Krajinovic, to boost himself into the semi-finals of the ongoing China Open 2018.

The Argentine easily won the match in 62 minutes, by registering a 6-3, 6-0 victory over his opponent, and acheived his 8th sem-final of 2018.

Fognini withdraws from Shanghai with an ankle problem. Still expecting to play Beijing SFs tomorrow vs Del Potro, but his (slim) London chances are now pretty much over. Still got a chance to go as an alternate.

The World No.4 only lost 4 of his service points in the primary set, which incorporates service breaks in the 3rd and 9th sets. He only spared 3 break points in the opening round of the 2nd set.

Del Potro, who has lifted trophies at the Abierto Mexicano Telcel presentado por HSBC and the BNP Paribas Open this season, will next test in-shape 4th-seeded Italian Fabio Fognini on Saturday.

Nadal, Djokovic, Federer and Del Potro now all confirmed for the World Tour Finals.
Expect the other 4 to be Zverev, Cilic, Anderson and Thiem but Isner, Nishikori, Fognini, Raonic and Tsitsipas still all with a chance if they can perform in Shanghai and Paris.#NittoATPFinals