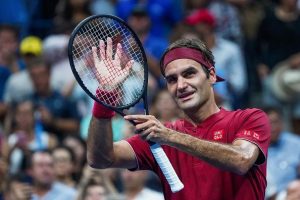 Five-time champion Roger Federer breezed into the US Open second round with a much expected triumph over Japan’s Yoshihito Nishioka at Flushing Meadows.

Federer, 37, required one hour and 52 minutes to win 6-2 6-2 6-4 in the night session on Arthur Ashe Stadium. The Swiss extraordinary tennis player hit 56 winners contrasted with only 17 from his 177th-positioned rival.

???@rogerfederer blasts his first rocket forehand of the night…#USOpen pic.twitter.com/BPHUuflOqH

Roger Federer improves to 18-0 in opening matches at the US Open, the most wins without a loss at that stage of this event by any man in the Open Era (since 1968).

Federer has 83 career wins at the US Open, 2nd-most behind Jimmy Connors (98). pic.twitter.com/A15Gvk3OIG

Roger Federer in sublime form.
Moving so well for 37. My pick to win the #usopen18 and his 21st grand slam championship #GOAT #federer