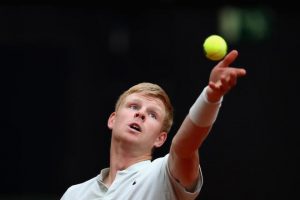 Kyle Edmund advanced to the last 16 of the Winston-Salem Open with a straight-set prevail over the Argentina national, Leonardo Mayer. Edmund won the match by 6-3, 6-3 as the match lasted only one hour and 13 minutes.

Kyle Steven Edmund is a British national and a professional tennis player. Since March 2018, he has been the top ranked British tennis player.

The 23-year-old, who has been named in the European Laver Cup team, did not confront a solitary break point and won 93% of the total points on his first serve.

Edmund will now confront Spain’s World No. 89, Roberto Carballes Baena in the following round of the ongoing Winston-Salem Open.

Roberto Carballes Baena may be ranked No. 89 in the world, but he has achieved something that his 16th-ranked Winston-Salem R3 rival Kyle Edmund hasn’t yet – and that’s win an ATP title.

As good as it gets from Kyle Edmund, who beats Leo Mayer 6-3 6-3 in his Winston-Salem opener. Executed his game plan very well. Big spin to the one-handed backhand and rush Mayer in his baseline play to keep him on the defence. Very well-thought out match. #atp pic.twitter.com/oIs1QXGZ3V