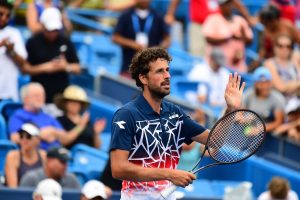 Alexander Zverev’s disappointing tennis season continued, as he lost to Robin Hasse, after struggling hard in the Cincinnati Masters ongoing Round of 32. The German barely edged the primary set 7-5, yet lost his momentum as he was defeated in the following two sets by 4-6 and 5-7.

Alexander “Sascha” Zverev is a German national and a professional tennis player. The tennis star is also the youngest player in the top 10 players of the Men’s Singles tennis rankings.

Zverev has crashed to a shock defeat. He loses to Robin Hasse 7-5 4-6 5-7. Our bad luck continues as Zverev is defeated by an opponent ranked 51 places below him ? Sorry guys but we’ll bounce back from this

Robin Haase will now confront either Bradley Klahn or Pablo Carreno Busta in the third round.

On the other hand, Zverev who is only 21 years old has played minimal tennis, amid the American hard-court season, as he likewise lost to Stefanos Tsitsipas in the Rogers Cup quarter-finals a week ago.

And now with no tennis activity for the next few weeks, Zverev will have enough time on his hands to contemplate before the upcoming tennis major tournament i.e. The US Open.

Those two defeats in a row will be a cause of concern for Alexander Zverev but it’s certainly not the end of his US Open hopes. Maybe a few days off will actually do him some good #Zverev #CincyTennis