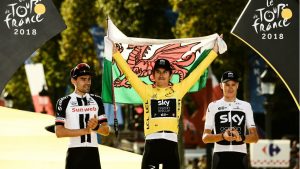 Alexander Kristoff won the tour’s last stage i.e Stage 21, and the Briton pair, Thomas and Froome crossed the line together, claiming a huge victory for Team Sky and Britain.

Geraint deserved to win as he had developed his lead over the past 20 phases and Tour tradition directs that the yellow shirt is not tested on the last stage.

Post his win, the 33 year old, expressed his feelings in a delightful manner. He said:

When I rode on the Champs-Elysees for the first time in 2007, that was insane – just to finish the race and just to be a part of it

To now be riding round winning it is just incredible. It’s just a whirlwind. I seem to be floating around on cloud nine.

Maybe when I’m 70, sat in a corner of a pub telling some 18-year-old what I used to be, it will sink in. It’s incredible, the stuff of dreams.

Congratulations @GeraintThomas86 Amazing Achievement,
Great to see you wearing that dragon with pride.

I’m absolutely made up for such a deserving winner and good friend. It was fantastic to see after so many years of hard work. Congratulations to Tour de France winner @GeraintThomas86 and @TeamSky!!! pic.twitter.com/oZ71ANXudw

Standing on the Champs with the other Welshies, so many flags out for @GeraintThomas86 , my favourite moment ever in Paris- shame we didn’t get a blast of our real national anthem though! Gwlad, gwlad…

Completely over the moon for @GeraintThomas86, so deserved! Such an inspirational message for the youngsters too, what a man.

His book, The World of Cycling According to G, is also sensational.