Barcelona Club: Can The ‘Mojo Charm’ Come Back? 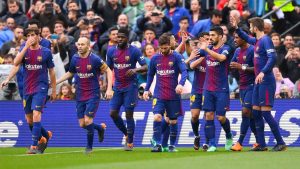 Barcelona is considered as one of the greatest clubs in football history. But, since 2016, the Spanish side have not been up to the mark. And, the biggest example of their disappointing performances has been UEFA Champions League.

UCL or UEFA Champions League is a continental club football league which is held on an annual basis. Top-division European clubs contest with each other, making it the most popular league in the world. However, it also makes it one of the most tough and prestigious titles that a team can accomplish.

And, Barcelona have not been lucky when it comes to this league. The Spanish club were thumped out of the UEFA Champions League (UCL) three times in succession. They have demonstrated an absence of commitment and group quality in the greater part of the UCL which had an adverse affect on their performances.

The fans are angry with their execution in the Champions League, as Barca failed to deliver up to their expectations on a constant basis.

Moreover, Barcelona have just won the UCL once over a period of 7 years, while their arch rivals, Real Madrid have won four. There are several reasons as to why the Spanish club has been unlucky in dominating this league like every other leagues they have won.

In this article, Allsportspk presents the top 5 changes that Barcelona need to do in order to go back to their winning ways and most importantly, dominate the Champions League 2018-19.

#5 A Change Up In Midfield

A change is required in Barca’s midfield, and in the upcoming season, Barcelona’s manager, Valverde can either pick a 4-3-3 or a 4-4-2 framework. If this happens, then Busquets and Rakitic will play in their settled places as no one at Barca can scrutinize their playing spots.

Iniesta’s place may be taken by one of the two players; either Arthur or the new signing Coutinho. Moreover, in less vital matches, Busquets could be given rest as Rakitic can serve as a good replacement.

Sergi Roberto had developed a likeness to play as a midfielder, however, Barcelona’s manager, Valverde had different plans. Even though, his new position as a right-back did not influence his form, however, this change affected Barcelona’s play in the midfield.

As a midfielder Sergie can score, spill and set up his colleagues truly well, all these reasons make him a customized player for the focal midfield position. The opportunity has already come in the upcoming season, and if Ernesto Valverde perceives this then it will be a huge boost to Barca’s midfield.