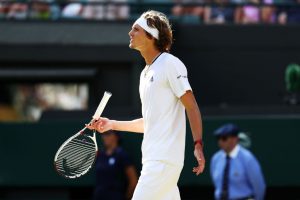 Ernests Gulbis had not won three tour-level matches in a row since 2016 Roland Garros. The former World No. 10 is now into the fourth round at #Wimbledon after stunning Alexander Zverev.

Tell us how far the ?? can go ⬇ pic.twitter.com/gEDcV6kKjf

Qualifier Ernests Gulbis causes an upset to win his sixth match at this year’s #Wimbledon by beating Alexander Zverev 7-6(2), 4-6, 5-7, 6-3, 6-0 pic.twitter.com/lQSwhUVoBp

What a #Wimbledon Ernests Gulbis is having! ?? pic.twitter.com/VaOfPJaYEQ

Kei #Nishikori has the best time management skills in men’s tennis! Defeats Nick Kyrgios with a 100 minute window, delivering up some great returning, some impressive focus and oh so much talent, and moves into the last 16 at #Wimbledon

Tell us if you believe the ?? star will reach the quarter-finals for the first time ⬇ pic.twitter.com/jDXldRy5oM

Into the fourth round of #Wimbledon for the third time…@keinishikori stars on No.1 Court, beating Nick Kyrgios 6-1, 7-6(3), 6-4 pic.twitter.com/Glv8JrlL7c 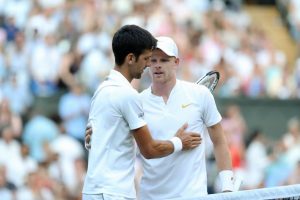 Three-time former champion @DjokerNole steps up to beat Kyle Edmund for a place in the #Wimbledon fourth round against @karenkhachanov.

Up, up and into the fourth round for @DjokerNole ?

Will @DjokerNole win his fourth #Wimbledon title this year? pic.twitter.com/1iSV4rEHmP

Raonic plays unseeded Mackenzie McDonald for a spot in the QFs.

Third straight year in the fourth round… ??@milosraonic defeats Dennis Novak 7-6(5), 4-6, 7-5, 6-2 to advance to the second week of #Wimbledon pic.twitter.com/xeNGuxQnTM

Frances Tiafoe started playing tennis at the Junior Tennis Champions Center where his dad was a custodian. Now, he is ranked #52 in the world!

Pretty disappointing 4th and 5th sets from Frances Tiafoe today. Should have won that one and faded really fast. #Wimbledon #USA