The first match of the semi-final was held of the ongoing FIFA World Cup 2018. The match wise highlights are appended below. 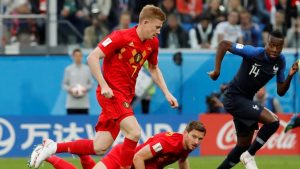 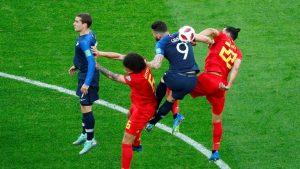 Goaaaaal for France ??
Samuel umtiti with the header from the corner
The blues lead against the Red Devils #فرنسا_بلجيكا#FRABEL pic.twitter.com/fTa5KgwzFM 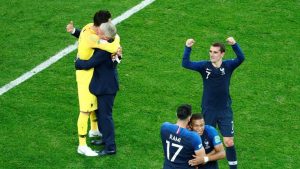 Regardless of the result of tomorrow’s match between Croatia and England, France are now the favorites to win this World Cup 2018.

Less i forget, tolisso is a stupid human being for not scoring that goal, he wasted pogba’s creativity and energy.

Had in been umtiti didn’t score, lol we will be addressing this issue well

The same weird noise I made at the TV in approval of Mbappe’s skill I just made in disgust of Lineker’s Umtiti closing link there. #FRABEL #FRA #BEL #WorldCup

Remember the opening? Belgium were aggressive, on the front foot. France drew their sting & stifled the world cup’s best attack. A game of small margins, an Umtiti winner and Les Bleus’ dream lives on.

France ?? deserved it … Varane and Umtiti outstanding defenders ⚽Mbappe the star of the World Cup?? Belgium ?? bottled it once again in a big tournament… big guy Courthois beaten at his near post… I think little Pickford would have saved it…

Hazard vs France. Story of his life, teammates letting him down, only outfield player with a rating >7. Penetrated France’s deep block, took on players, contributed defensively and came from deep. Was playing central, left and right ??. @hazardeden10 pic.twitter.com/MCszj3sZkH

Join allsportspk tomorrow for the 2nd semi-final between Croatia and England.