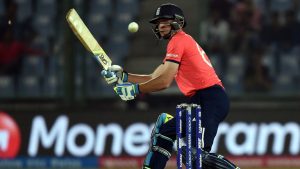 Jos Buttler has batted almost on all possible batting positions but the English opener’s true potential came out when he began to open the innings for Rajasthan Roayals in the IPL 2018.

As an opener, Buttler scored five consecutive half centuries and amassed 428 runs in 6 matches. He carried his IPL form into the series against Australia and decimated them with his hitting prowess to win the series for England.

The English batsman is brutally consistent and has scored 1199 runs in 63 T20I matches with a strike rate of 137.5. Additionally, Jos Buttler also holds the record of scoring the fastest century for England in just 46 balls.

A proven performer and a hard hitter of the ball, Allsportspk expert panel believes that Jos Buttler is the 2nd best option to beat Aaron Finch’s record of 172 runs.

Whose Number 1? Move to the next page to find out!