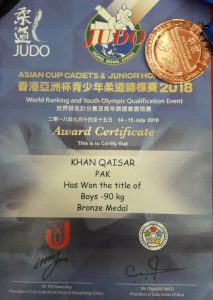 This win will not only improve Qaisar Khan’s present world ranking at No. 25 in 90kg weight category, but also enhance the chances to qualify for Youth Olympics 2018.

Qaiser had recently won a bronze at Asian Cup Cadet held in Kyrgyzstan.

Earlier, in the Kong Kong event:

Qaiser will leave Hong Kong tomorrow for Macau, where he will get train to participate in Asian (Judo) Cup Cadet from 19th to 22nd July 2018.

IPL Match Highlights of Match No. 48 & Points Table as...