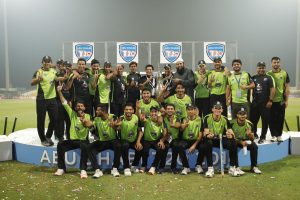 Lahore Qalanders of Pakistan vanquished Multiply Titans by 15 runs in the final of the Abu Dhabi T20 Trophy to lift the title.

Batting first here at the Zayed Cricket Stadium on Saturday, Lahore Qalandars scored 149/6 in 20 overs. The highest scorer for Qalandars was Sohail Akhtar who scored 56 while Faizan was the 2nd highest scorer with 56 runs.

Pursuing a target of 150 runs, Multiply Titans were confined to 133 runs in 20 overs. Qalandars displayed an exquisite show of some top-notch bowling, with Shaheen Afridi taking 2 wickets for 24 runs, and also winning the man of the match award.

One thing is for sure, the Lahore Qalandars remained committed with their player development program. The raise of Haris Rauf, M Faizan, Maaz Khan is an example. The way they brought Sohail Akhtar back to system is also a remarkable achievement. #PakistanKeQalandars

Ladies and gentlemen… presenting the champions of the very first #AbuDhabiT20 – the @lahoreqalandars !!! The dedicated band of youngsters proudly lifted the coveted trophy and basked in the winning glory. Celebrate away Lahore Qalandars, you’ve certainly earned it! #MTvLQ pic.twitter.com/WzdMuokG3A

Congrats Lahore Qalandars on winning a tournament for which you weren’t created for. This must make you really proud and the fans are dancing in Lahore as we speak. https://t.co/EXTTQNXBz9

Lahore Qalandars finished bottom of the PSL in each of its first three seasons, while the Titans have won the last three Ram Slam events but young #PakistanKeQalandars defied all odds to become the champions of inaugural Abu Dhabi Cup.