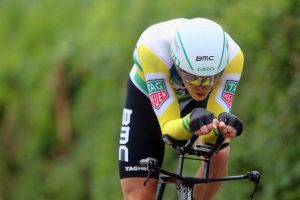 Rohan Dennis won the opening time preliminary of the 2018 Vuelta a España in Malaga, beating Michal Kwiatkowski to the stage triumph and the general lead.

The Australian cyclist blitzed the 8km course at more than 49.6kph, well up on Kwiatkowski at the middle of the road check before driving the pace to complete six seconds up on the Pole.

It adds a Vuelta stage win to Dennis’ palmarès, which means he has now won a phase in every one of the three Grand Tours, having finished the arrangement of pioneers’ shirts with the stage win and the pink jersey in the wake of opening time preliminary of the 2018 Giro d’Italia.

Among the GC contenders, a large portion of them stay bunched genuinely near one another, with Kwiatkowski holding the most preferred standpoint after the principal day.

#LaVuelta18: Rohan Dennis (BMC) takes the win with a time of 9’40. @sebaslangeveld is top #PinkArgyle in 19th. @UranRigoberto is 45″ on Dennis but within 20″ of most of the overall contenders.

Dennis’ colleague Richie Porte, a hot favourite prior to the race, was presumably the most noticeably awful off, as he completed 51 seconds down and he now has a piece of time to survive in the event that he needs to win the race overall.

“Part of my goal coming into #LaVuelta18 was to get a stage win and it’s nice to do that on the first day again and also get the jersey” – @RohanDennis after securing an impressive victory in Malaga today.