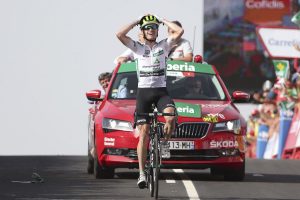 Ben King asserted a second stage accomplishment at the 2018 Vuelta an España, winning solo at La Covatilla on the principal hors-categorie summit finish of the race.

The American, who won on the Puerto de Alfacar stage 4, assaulted from a 11-rider breakaway somewhere in the range of 10km in front of the last move to the ski resort in western Spain, and held his lead the distance to the best in spite of an energetic chase from Bauke Mollema.

Beginning the climb 1:30 down, Mollema himself dropped the remainders of the crush and ripped at his route spirit to inside 15 seconds of an apparently weak King.

Be that as it may, in a sensational wind, the angles facilitated in the last couple of kilometers and Ben King pulled away afresh, a look of mistrust spreading over his face as he raised his arms up high for the second time in what has been an unprecedented week.

Have thought frequently today about Ben King’s solo stage win at La Vuelta, and just how badass that was. So impressive. What a ride. Just, wow. Superlative. Etc, etc, etc. #LaVuelta18 pic.twitter.com/hpfSY4ERFi

Incredible that Trek and Bauke didn’t learn anything from Pierre Rolland’s defeat from stage 4. Incredible. Ben King is flying in this Vuelta but he was also much smarter than his rivals. Chapeau! ? #LaVuelta18