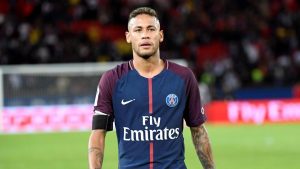 The Brazilian winger, Neymar has been repeatedly linked with a move to Real Madrid since he was transferred last summer to Paris Saint-Germain. However, the Los Blancos have clarified there is no chance they will sign Neymar.

The rumours escalated a few days ago when Real Madrid’s star player, Cristiano Ronaldo agreed on a 105 million euro fee to join Juventus.

.@NeymarJR: ‘There was no devaluation. People never forget me. I don’t get angry with the memes or jokes about me’ – https://t.co/gFO2Y76f0u pic.twitter.com/Ykd1egG6NP

Real Madrid said , “Although the relation between the two clubs(Real and PSG) is exceptional, but if the Los Blancos wants to sign Neymar, the first thing that the Brazilian striker would do that he will prefer to go to his club.”

However, according to the reports, PSG has offered Neymar a new contract to keep him there. Moreover, the club is also ready to increase his yearly salary (37 million euro) so that he could move closer to Lionel Messi’s salary (50 million euro).

So no Neymar at Real Madrid anytime soon then… ? pic.twitter.com/wOhWesMTJG

The Brazilian has also reportedly said that he will continue to play football in Paris. He concluded his statement by saying that he came to this club for challenges and objectives and hopes that his next season here would be a successful one.

Neymar has had his say on all that transfer speculation pic.twitter.com/gTma3h6wrt

Also, the Paris Saint-Germain striker has no release clause and it is asserted that Real Madrid want to force along a move in a transfer bid.

Neymar has dismissed suggestions he is set to leave as Real Madrid step up their search for a replacement for Cristiano Ronaldo. (Source: Marca) pic.twitter.com/936swPymUT