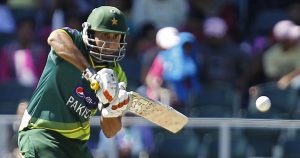 Pakistan batsman Nasir Jamshed has been banned for ten years after an independent anti-corruption tribunal found him guilty of five of the seven breaches of the PCB’s anti-corruption code he had been charged on.

Jamshed is the sixth Pakistan player to be punished in the wake of the PSL spot-fixing case in 2017, and received the heaviest punishment. Previously, Sharjeel Khan, Khalid Latif, Mohammad Nawaz, Mohammad Irfan and Shahzaib Hasan were all fined and banned on separate charges. Jamshed last played for Pakistan at the 2015 World Cup.

? Nasir Jamshed has been handed a 10 year ban by the PCB tribunal.

?Jamshed was found guilty of 5 out of 7 breaches of code of conduct. He’s been punished so severely as he was the main recruiter.#SpotFixing #NasirJamshed_Ban pic.twitter.com/y05Be4M8iY

This is the second punishment for Jamshed in the last two years. In December 2017, Jamshed was banned for a year by the PCB after an anti-corruption tribunal found him guilty of non-cooperation in the 2017 PSL spot-fixing case. Jamshed had been the third player to come under the PCB’s radar when they had begun investigations into corruption in early 2017 and had been arrested in the UK in February 2017.

In a short verdict, the three-man tribunal ruled on Friday that apart from suspension from playing any level of cricket, a player found to be in breach of the anti-corruption code should also be ineligible from holding any management roles in Pakistan cricket for life.

#NasirJamshed what a loss. We have lost such players due to incompetence of @TheRealPCB and lack of education and training for the players.

This is the second punishment for Jamshed in the last two years. In December 2017, Jamshed was banned for a year by the PCB after an anti-corruption tribunal found him guilty of non-cooperation in the 2017 PSL spot-fixing case. Jamshed had been the third player to come under the PCB’s radar when they had begun investigations into corruption in early 2017 and had been arrested in the UK in February 2017.

In separate proceedings, the National Crime Agency (NCA) in England is also involved in investigations emanating from the allegations of the spot-fixing case. Early in the case, the NCA had arrested – and subsequently released – Jamshed. However NCA reportedly hasn’t yet reached a conclusion in their investigation yet. The PCB, during proceedings, heard from an NCA official on Skype as one of the witnesses, but the agency didn’t offer any evidence against the player.

Cricketer Nasir Jamshed slapped with a ten years ban. What a disgraceful end to an otherwise good talent. Hope the upcoming youngsters can learn not to end like him.

Jamshed, according to the PCB, was the “linchpin” connecting several corruption cases. Considered a central figure in the corruption scandal, Jamshed faced charges of approaching and soliciting other players for fixing. The verdict today finally wrapped up the saga that arose from the spot-fixing scandal in the PSL in 2017.

“PSL 2017’s fixing trial has concluded,” the PCB lawyer Tafazzul Rizvi said after the verdict. “There are a few cases you really don’t rejoice after winning; instead you feel sad about it because it ends with another career destroyed. It’s painful to see a player who didn’t have his conduct right and didn’t fulfil his responsibilities according the anti-corruption code of conduct. Our stance from the first day was he was the linchpin and he is the one who recruited players.

People are holding @najamsethi responsible for Nasir Jamshed’s ban, saying that he was deliberately targetted. This campaign is being led by the fixer’s better half @SamaraAfzal. Such a shame that these people don’t die off disgrace.

At least one part of the evidence against Jamshed was a collection of WhatsApp voice recordings allegedly between Jamshed and others also implicated in the case; these recordings were also leaked to the media. The PCB prosecution, however, mainly acted on the testimonials in which they treated Jamshed as the axis who was enticing players into the fixing web.

“Our point was proved and accepted by the tribunal, and they found him guilty on multiple charges. Even if he returns after rehabilitation, he is not allowed to be engage in any cricket management role and will be kept him away from cricket. We also suggested his name be added in a list of persons mentioned in anti-corruption lectures who are to be avoided by the players. So this all ends here.”

“We can say that as far as cricket is concerned and within PCB’s jurisdiction, Nasir Jamshed played a pivotal role in this whole case and this is why he has been given a 10-year ban” : PCB legal advisor #Cricket pic.twitter.com/7VYW7Vhoux

Jamshed’s lawyer, Hasan Warraich, did not appear in front of the tribunal on Friday, and wasn’t available to speak to the media afterwards. It is not yet clear whether Jamshed intends to appeal the verdict. His wife, Samara Afzal, put out a statement on Twitter, bemoaning many “failings of the case”. She said she would accept Jamshed’s guilt if it was ruled as such in a British court of law, but if he was exonerated, she would “drag the PCB through every court in the UK if necessary to get justice”.

Banning Nasir Jamshed is a great call by PCB. It shows our reluctance towards fixing, corruption, and, wrong-hood. Good step @TheRealPCB #CorruptionSeAzadi

Nasir Jamshed is fixed in spot fixing case; a ban for ten years! What will be he doing in coming few years? Moving to Canada? Dubai? England or something else?