This is the last match of the Premier League, Match Day 16 of 38. The highlights are appended below the points table. 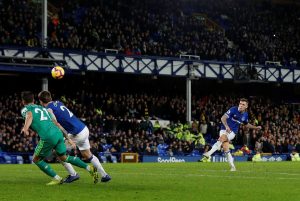 Theo Walcott has now made 300 appearances in the Premier League.

Ken Sema has completed more take ons (3) than any other player on the pitch vs. Everton.

Not holding back on his first Premier League start. ?‍♂️ pic.twitter.com/0tmIrvy3VV

The 19 year old signed for Watford on transfer deadline day & scored on his Watford debut against Reading in the EFL Cup. #WHUFC #EVEWAT pic.twitter.com/UEmdoK5mfp

Watford have never won a premier league game away when losing at half time. Everton exist for these kind of hoodoos to be broken!! #EVEWAT

Lucas Digne snatches a point for the hosts after the Hornets had fought back from Richarlison’s opener with two quick-fire goals – and a penalty save!#EVEWAT pic.twitter.com/AIEwcqNPy1

2 – Gylfi Sigurdsson has missed two of his last three penalties in the Premier League (at Everton), after previously scoring all six penalties in the competition for Swansea City. Denied. #EVEWAT pic.twitter.com/sw6yUnSa5A