This is the last match of Match Day 3 of 38. The highlights are appended below the points table. In case, you missed the last matches, click here.

Match 10 of 10: Manchester United vs Tottenham 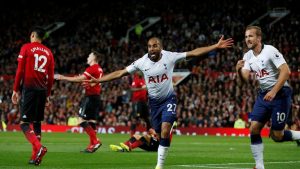 If Mourinho goes who should replace him at @ManUtd? Andy Gray’s choice stuns @richardajkeys into silence! #beINPL #MUNTOT #MUFC pic.twitter.com/IoqF7d4469

If only there had been some way Manchester United might have been able to predict that José Mourinho’s appointment would result in two years of supernaturally boring football followed by everything going tits up.

But no. There was absolutely no way of knowing this would happen.

Manchester United have lost by 3+ goals at Old Trafford for the first time in any competition since March 2014 (3-0 vs. Manchester City).

The first time it has happened under José Mourinho. ? pic.twitter.com/ODwHxL2z6B

One thing is for certain: Manchester United are in crisis mode. The club can brief what they want, but results speak louder and some players look like they have totally given up playing for Mourinho.

Only Zidane can save Manchester United now. pic.twitter.com/5vEnH4qpAQ

Me laughing at Manchester United??? pic.twitter.com/0CudpqLFY0