These are the first four matches of the Premier League, Match Day 15 of 38. The highlights are appended below the points table.

Match 1 of 10: Bournemouth vs Huddersfield 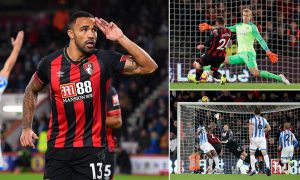 Bournemouth away on a Tuesday night ?The @premierleague computer has had a stinker! Respect the job Howe has done down there but let’s not forget they CHEATED their way to the PL by breaking FFP rules. Should never have been allowed to go up. #UTT #HTAFC

As it stands, they will leapfrog #MUFC into sixth place in the #PremierLeague #BOUHUD pic.twitter.com/P9QHN9d3ry

First-half strikes from Callum Wilson and Ryan Fraser move the Cherries up to 6th in the #PL table#BOUHUD pic.twitter.com/AVL4yPuDzs

Brighton are the first team to score 3+ goals and receive a red card in the first half of a Premier League match since Man Utd vs West Ham in May 2008. pic.twitter.com/OKx7cA3mtL

All over at the London Stadium and West Ham have secured back-to-back wins in the Premier League for the first time in 682 days as they beat Cardiff 3-1 thanks to a ruthless second half display. Lucas Perez (2) & Michail Antonio the goalscorers. #WHUCAR

Three goals in 12 clinical second-half minutes from the Hammers as they put on a masterclass against the Bluebirds#WHUCAR pic.twitter.com/krdaSZoZlo

25 – Leon Balogun scored just 25 seconds after coming on as a substitute for Brighton – the second quickest goal by a sub in the Premier League this season after Daniel Sturridge vs West Ham (24 secs). Introduction. #BHACRY

For the next two matches, move on to the next page!