This is Part 2 of the article. Just in case you missed Part 1, click here and read all about the origin and the legendary players squash has ever produced.

Part 2 covers, the type of Equipment, the Scoring System, Prospects of Success and Popularity level in squash .

How is it is played?

The players take turns in hitting the ball towards the wall that is ahead of them. They ball is allowed to strike for as long as it hits below the out-line. However, if the ball hits the floor before making contact with the player’s racket the individual loses a point.

Players are allowed to move anywhere inside the court, however deliberate obstruction intended to block the opponent’s pathway is prohibited. 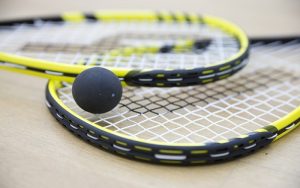 The rackets involved in this sport are pretty similar to the ones used in tennis, however the ball used is made of different material and is much smaller in size.

Most of the rackets used in squash range between 90 and 150 grams, however the maximum limit is 255 grams.

As, for the Squash ball as you may have seen in the picture above that the ball is relatively small in size than a normal tennis ball.

Also, different types of balls are used by players of different levels and each ball normally weighs around 23 to 25 grams. Also, balls can also vary in different temperatures and atmospheric conditions as specific balls are made for different standards of play.

A point worth noting here is that a Squash ball must be hit several times before each session or a match as cold squash balls don’t provide much bounce. This process is normally known as “Warming up the ball”. 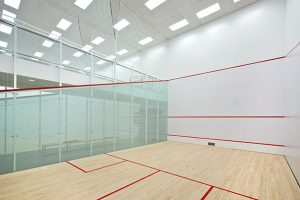 The squash court is closed from four sides and the playing surface is between the enclosed area. The length, width and height of a standard Squash Court is 9.75 meters, 6.4 meters and 5.64 meters respectively.

It is divided into two sides with floor markings to designate the playing area for both teams. However, there are no markings on the back and side of a squash court.

In this system, the server gets a point if he wins a rally but if the returner wins, he doesn’t get a point, instead the service ends change. And, the first player who scores 9 points against his opponent wins the game.

This is the current scoring system in professional and amateur squash. Known a PARS, in this system a rally winner always gets a point and it does not matter whether he is the returner or server. The winner should win by two clear points in order to win the match.

This system isn’t much widely used as games based on this system are considered too long.

And, the person doesn’t have to be a better rather he has to be the fitter person to win if this scoring system is applied. Usually the “best-of-five” strategy is used in this type of scoring.

Is it easy to make a name for yourself in this sport?

Despite, Squash being unable to reach to a much wider audience, making a name for yourself hasn’t become much easier. There are several reasons as to why Squash is not as easy as it really looks to the naked eye.

Despite being played in a closed court, Squash matches take a lot of time to finish. This means that in order to succeed in this game, one has to have extra amounts of endurance inside of him.

To be a top player in this sport, one has to have the stamina of covering at least 5km of ground in a single match. 5km sounds nothing, however when combined with the pressure of the match and the fatigue of remaining alert all the time, it becomes much more difficult.

Even if you master your physical skills, staying mentally sharp is what it really takes to win a squash match.

You need to be aware of when and how you are making contact with the ball while at the same time also anticipating the ball’s behavior when it strikes the wall.

Squash is all about getting into the player’s head as the most deceptive player in this sport can become the World champion in a short amount of time.

As, the main objective in Squash is to hit the ball many would believe that it is easy to do so. However, unlike tennis the ball used in squash is much smaller in size. This means that it moves at a much greater speed than a Tennis ball.

Theoretically it may seem easy but in the middle of a competitive game where emotions run high, it is highly difficult to properly use your hand-eye coordination to hit the ball.

Unsurprisingly, a doubles match in squash is much easier if compared to a Singles match. The reason is simple, as in a doubles match, players can easily cover more ground without getting much fatigued in the process.

But, it is the Singles that are a sight to see as both players have to give every bit of their stamina on the court in order to excel in the match. Simply, the speed of the ball at which it travels is more than enough for a Singles match to be much more exciting and difficult than a doubles match.

Popularity Of Squash; A Debatable Point

Although, the hype around this game is pretty much intact in major countries of the world. However, some debatable points come into the picture that revolve around its popularity. Some of them are:

Although, this has been the biggest disadvantage for this sport however, it is improved as white squash balls and glass courts are used nowadays.

In the past, the speed of the game did not allow the viewer to properly enjoy the game while being at home, however now more TV channels are broadcasting this sport.

Major reason behind not getting enough TV coverage

A counter point that TV channels make for not giving enough coverage to this sport is the financial hindrance that they are faced if they broadcast Squash on a frequent basis.

As, compared to other sports there is not much space for advertising in a Squash court. Moreover, only 4000-4500 spectators, while in sports like football and cricket the number averages from 60,000 to 100000+.

This is the main reason as to why advertisers choose to prefer other sports when it comes to making money. However, with the increasing popularity of this game Squash is certainly getting more coverage as TV channels are realizing how much people love this sport.