With the dust having settled on Round 12 of Super Rugby, we have gone through the action to pick out the best players last weekend.

After that commanding win over the Hurricanes, six of the Crusaders make our selection this week, with the efforts of the Kings and Blues also acknowledged after an entertaining weekend. 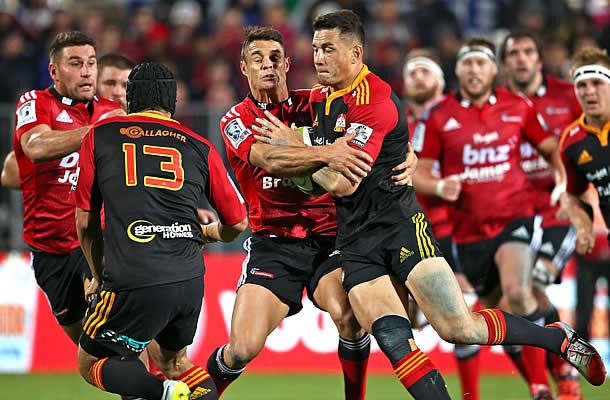 See who made the cut below.

15 David Havili (Crusaders): Havili was a major contributor to his side’s top-of-the-table victory over the Hurricanes. He made an impressive 10 carries and got over the advantage line regularly while beating five defenders. Havili will no doubt be looming in the minds of the All Blacks selectors as he churns out one good performance after another. Havili just edges out Matt Faddes, who scored a sublime try after he collected expertly from a grubber kick.

14 Alshaun Bock (Kings): Bock put in the performance of his career with a lethal attacking display. The veteran wing scored two magnificent tries – his second when he showed a great turn of pace to outsprint Lwazi Mvovo and Garth April from the half-way line to cap off a memorable Kings try. Bock also provided an assist and made over 120 metres, beating five defenders.

13 Samu Kerevi (Reds): A wonderful all-round performance from the Reds’ talisman as he made 150 metres, 15 carries, four clean breaks and beat nine defenders while scoring two tries. His defensive effort did not go unnoticed as he made 10 tackles. The Blues’ George Moala, Crusaders’ Jack Goodhue and the Highlanders’ Malakai Fekitoa also shone brightly in Round 11.

12 Ryan Crotty (Crusaders): Crotty’s reading of the game was his hallmark in Round 11; to detect danger and snuff it out. The mere fact that Super Rugby’s top try-scorers of the season centres Ngani Laumape and Vince Aso failed to even come close to the try-line proves how invaluable opposite number Crotty’s contribution was, as Crotty make key turnovers too. The Force’s Bill Meakes also impressed.

11 Rieko Ioane (Blues):  Ioane followed up his brace from the previous weekend with another brace in Round 12 – seriously impressive stuff from the 20-year-old. He continues to make a mockery of opposition defences and also finished with an assist, having beaten three defenders. Eto Nabuli of the Reds scored again to push his tally for the season to eight while the Force’s Alex Newsome was also outstanding in his side’s win over the Jaguares.

10 Lionel Cronjé (Kings): Outstanding for the Kings, as he has been for much of the year, with Cronjé scoring 20 points in the win over the Sharks, including a try as he got one over his old side thanks to Bock’s burst of speed. Cronjé made 55 metres from 12 runs, beating three defenders and making a pair of clean breaks while also producing an assist.

9 Augustine Pulu (Blues): Tight call with the Force’s Ian Prior after he played a major role in the win over the Jaguares, but Pulu gets the nod after setting up Scott Scrafton’s try. Showed sharp reactions to snatch a loose ball out of the air for his own score and Pulu beat three defenders while also winning a turnover.

8 Akira Ioane (Blues): Competition from Scott Higginbotham and Warren Whiteley but the Blues number eight gets the nod after rediscovering his best form over the last few weeks. Ioane beat four defenders as he made 60 metres against the Cheetahs and finished with a try and an assist, whilst also making seven tackles and winning four lineouts.

7 George Smith (Reds): Plenty of competition from Matt Todd, Kwagga Smith (who scored a great solo try against the Brumbies) and Dillon Hunt (19 tackles), but Smith gets the nod after another ageless effort in the back row as the Reds defeated the Rebels. Smith made 12 carries but his best work came in defence, with a phenomenal 18 tackles and then winning four turnovers.

6 Steven Luatua (Blues): Both Ross Haylett-Petty and Tomás Lezana had their moments in the game in Buenos Aires. Luatua is our pick at six though after his efforts against the Cheetahs, benefiting from a brilliant offload by Charlie Faumuina to score a try and helping to set up Pulu’s score. Ten runs from the All Blacks back-row, as well as seven tackles, rounded off a busy game.

5 Franco Mostert (Lions): The Springbok enforcer was superb in his side’s hard-fought victory over the Brumbies in Canberra. Mostert did well in the lineouts where he stole two of the Brumbies’ balls but was particularly impressive on defence – especially around the fringes of the rucks and mauls – and made 16 tackles. Scott Scrafton of the Blues and the Kings’ Wilhelm van der Sluys also caught the eye.

4 Luke Romano (Crusaders): Was one of the Crusaders’ unsung heroes in their epic win over the Hurricanes in Christchurch. The All Black’s experience proved invaluable – after the loss of lock partner Scott Barrett to injury, early on – especially as a ball carrier and he gained 27 metres from nine carries with one defender beaten. Also won a handful of lineouts and edges out the Blues’ Patrick Tuipulotu and Andries Ferreira of the Lions.

3 Owen Franks (Crusaders): The veteran front-row impressed at the coalface of his side’s forward effort against the Hurricanes. Franks delivered a dominant display in the scrums and cleaned out the rucks and mauls with great intensity. Comes in ahead of fellow All Black Charlie Faumuina of the Blues.

2 Codie Taylor (Crusaders): Another All Black who was superb in Christchurch, Taylor impressed with his core duties especially his throw-ins at the lineouts and as part of that dominant scrum. Was also a willing ball carrier and finished with 23 metres gained from three runs with one clean break. James Parsons of the Blues and the Lions’ Robbie Coetzee also played well.

1 Joe Moody (Crusaders): The All Black prop was prepared to do the dirty work which laid the platform for his flashier team-mates to shine on attack. Moody shone in his core duties especially the scrums and made a big contribution as his side dismantled the Hurricanes in the set-piece. Beats out the Kings’ Schalk van der Merwe.