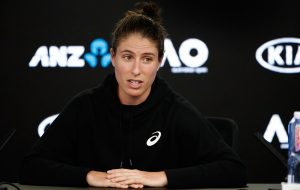 English number one Johanna Konta proceeded with her US Open preparation, with a 1st round prevail over Germany’s Laura Siegemund at the Connecticut Open. Konta, who is positioned 46th in the Women’s Singles Tennis rankings, won 6-2. 7-5 against the world number 146.

.@JohannaKonta wins an intense 6-2, 7-5 battle over L. Siegemund to reach R2 at the @connecticutopen!

The Briton lost 4 points on serve in the opening set, yet had to dive further in the second breaking to lead 6-5 and eventually winning the game.

Johanna #Konta continued her US Open preparation with a first-round win over Germany’s Laura Siegemund at the #ConnecticutOpen. #Tennis pic.twitter.com/07YCgrbx4E

Konta, 27, was the seventh seed at Flushing Meadows a year ago, however lost to unseeded Serb Aleksandra Krunic in the 1st round, and has dropped down the rankings since.

In any case, the American hard-court season has given the 2017 Wimbledon semi-finalist a lift going into the US Open.

? Konta hit 6 aces and won 85% of her first serve points for the good victory in 1 hour and 45 minutes ?#tennis #tenis #konta pic.twitter.com/nCJJ7Evpr6

Konta, showing up in the primary draw in New Haven, will play Spain’s Carla Suarez Navarro in the second round.

One match in: Johanna Konta beats Laura Siegemund 6-2, 7-5. Aliaksandra Sasnovich-Kristina Mladenovic started an hour before that, is 3-2 on serve in the third after two tiebreaks, and may take two more hours