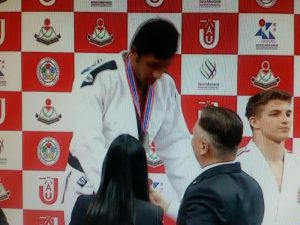 Qaisar Khan Afridi once again showed his worth in Asian Cup Cadet event in Macau. He won the Silver medal.

Earlier Qaisar won the preliminary round against Tajikistani Judoka, Kurbonov Emomrizo who in World ranking is No.12. In the Semi-Final, he won on Ippon point basis from a Mongolian player.

Before competing in the Asian Cup Cadet, Macau event, Qaisar in last few days has participated in the other Asian Cup Cadet events and won as follows: