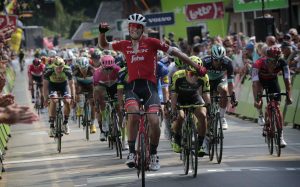 With only 1 kilometer remaining, Trek-Segafredo utilised a sharp trick, to permit Jasper Stuyven the opportunity to break free and win stage five of the BinckBank Tour with a late assault.

Jasper Stuyven is a Belgian national and a professional cyclist, who currently represents the cycling team, Trek–Segafredo.

#BinckBankTour
It’s a beautiful thing when the pre-race plan is carried out perfectly!
What a fantastic team effort behind @Jasperstuyven‘s win! pic.twitter.com/9mxDG70cDN

Stuyven lead the peloton through a tight chicane with 1km to go, and figured out how to get in front, after the colleague riding on his wheel cunningly dropped his pace to slow down the rest of the peloton.

In a close pursuit, that went to the last possible minute, Stuyven pretty much figured out how to battle off the peloton, from which Caleb Ewan won the dash to complete second in front of Zdenek Stybar who finished third in this race.

Having been @Jasperstuyven‘s team mate now for nearly a full season. I’ve seen him come so close to major victories all year and to be a part of his win today feels really special.
Really happy for you mate. All the @TrekSegafredo boys committed fully to a plan. And we delivered

Trek-Segafredo did spectacular work to set up the win, taking to the front of the peloton for the last couple of kilometers, paving the way to the conclusive chicane, and conveying their man to triumph.

I havent seen a tactic like that. They worked in front of the peloton 7-8 kilometers for one man breake in last km, not for sprint. Well done

Meanwhile, Matej Mohoric figured out how to broaden his lead in the general rankings, in the wake of increasing some time in the last kilometer.

Team News: Jasper Stuyven’s move at the end of stage 4 at the Binck Bank Tour – attacking out of the final S-turn with one kilometer to go & take a dramatic win – gave Trek-Segafredo a hometown win they have been chasing for years.https://t.co/C1vmuolIEZ

Congratulatoins for the stage victory! Fantastic finale and great job for the team! And drink champagne in moderation!