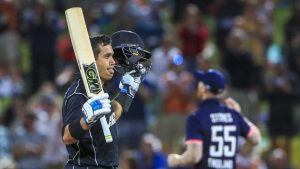 New Zealand headed into the 4th ODI of the five-match series with a trail of 2-1. England expected to secure this match to pick up a vulnerable lead of 3-1, and they were well on their way at 267/1 out of 37 overs. New Zealand pulled back things at Dunedin and confronted a target of 336 rushes to remain alive in the series .

Blackcaps endured a horrendous beginning as they lost their openers Colin Munro and Martin Guptill for zero. Ross Taylor exited to bat with the squad’s score perusing 2/2 and played an innings of sheer character. He previously had the help of Kane Williamson and afterward found a partner in Tom Latham.

Collecting runs tirelessly, Taylor and Latham sewed an organization of 187 keeps running for the fourth wicket. Jumping for a prop after his nineteenth ODI century, the number four endured damage which hampered his running seriously. A limping and stumbling Taylor did not resign hurt and pursued the fight for the team’s odds.

After Latham’s fall, Colin de Grandhomme’s snappy fire 23 from 12 brought the Kiwis closer yet at the same time requested a last exertion from Taylor. Requiring 32 from the last four overs, Taylor crushed Woakes for six and four to set New Zealand in the driving seat. The limping legend completed 181 not out from 147 balls and saw his squad close a mind blowing win.