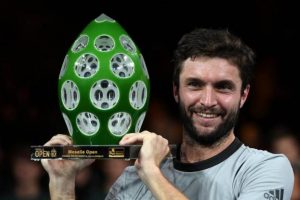 Gilles Simon rolled back the clock once more on Sunday at the Moselle Open in Metz. The 33-year-old Frenchman won his third Metz title (2010, 2013) and second crown of the season, beating German qualifier Matthias Bachinger 7-6(2), 6-1.

“I have a good feeling here, I also have the family coming. So it’s a very nice feeling to come back every year,” Gilles Simon said.

Gilles Simon, who also captured the Tata Open Maharashtra in Pune to start the season (d. Anderson), has won two titles in the same season for the first time since 2011 and continued what has been a career renaissance for him in 2018. He started the year at No. 89 in the ATP Rankings, and he hadn’t won a title since February 2015 in Marseille.

But with his 14th ATP World Tour crown (14-7), Gilles Simon, currently No. 39, guaranteed his return to the Top 30 of the ATP Rankings (No. 29) on Monday when the new rankings are released. He also continued French domination of the ATP World Tour 250-level tournament in Metz.

Frenchmen have now hoisted the trophy in 10 of the tournament’s 16 editions, including eight of the past 10. Simon will receive 250 ATP Rankings points and €89,435 in prize money. “I just want to play as much as I can,” he said.

No one beats Gilles Simon nine times in a row…?

Bachinger, despite the loss, had the best week of his career. The 31-year-old had celebrated just one tour-level victory this season before Metz. But he qualified and then won four matches in a row to reach his maiden ATP World Tour final. The German, No. 166 in the ATP Rankings, will climb 31 spots to No. 135 after receiving 150 points. He also will receive €47,105 in prize money.

“Today, I was definitely a bit tired and of course, I am a bit disappointed I couldn’t take advantage of the opportunities I had in the first set,” Bachinger said. “I need to be positive, this has been an incredible week for me. If I would have been told that I would reach the final when I arrived here to play the qualies, I wouldn’t have believed it.”

Bachinger had three set points on Simon’s serve at 5-6, 0/40, but the Frenchman erased them all and cruised in the tie-break. Simon wore the German down in the second set, breaking twice and serving out the match to love.

“I put a lot of energy into this [5-6] game because I felt like it was really important to change this momentum if possible and I was able to do it, and it was for sure the key point of the match,” Simon said.