These are the first 7 matches of the Premier League, Match Day 11 of 38. The highlights are appended below the points table.

Match 1 of 10: Bournemouth vs Manchester United 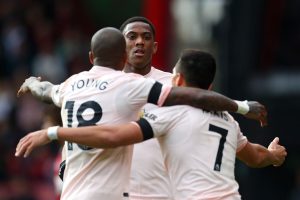 So proud of the @afcbournemouth lads today they were superb against @ManUtd 100% deserved something from the game. It shows how far this football club has come when your absolutely devastated loosing to @ManUtd thanks to all our supporters you we’re amazing. #Onwards&Upwards

@mrjakehumphrey #PLTonight Do you think Marcus Rashford should be starting for Manchester United all the time in every match from now on?

Manchester United have kept just one clean sheet in the Premier League so far this season.

200 #PL appearances ✅
Eight years at #MUFC ✅
Working with the boss ✅ @ChrisSmalling has been chatting to the @PremierLeague! pic.twitter.com/VuoGu5RkDx

Match 2 of 10: Newcastle vs Watford 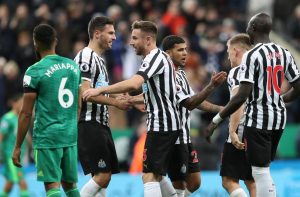 Ayoze Perez’s glancing header gives the Magpies their first #PL victory of the season and moves them out of the relegation zone#NEWWAT pic.twitter.com/MLEVym0o2i

Perez gets Newcastle off and running: Newcastle recorded their first Premier League victory of the season as Ayoze Perez scored in a 1-0 win over Watford on Saturday. https://t.co/eKfazx2ME3 pic.twitter.com/T8i6SqWcxN

Newcastle got their first Premier League victory of the season as Ayoze Perez scored in a 1-0 win over Watford on Saturday. #PL pic.twitter.com/ZLS8sIVxxF

? Matchwinner @AyozePG spoke to NUFC TV after his first goal of the season gave United their maiden @premierleague victory of the campaign this afternoon.

It took 11 games, but Newcastle United have their first win of the Premier League season.

Full time. @LCFC have beaten Newcastle 1-0 with a second half Vardy header. Great start to the @premierleague season #fm19

Match 3 of 10: Everton vs Brighton 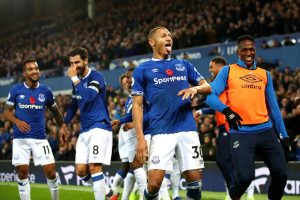 Richarlison stars as he nets twice to inspire Everton to victory#EVEBHA pic.twitter.com/5uu88hQajO

? “Everton dumped me. We finished 8th but it still wasn’t good enough…”

On the Sporting Couch: a psychological profile of Sam Allardyce this Sunday.

? | Team news is in at Goodison Park – and Marco sticks with the same XI from the previous two games.

Let’s carry on where we left off last time at home… ?? #EFCmatchday pic.twitter.com/HMDFJRJvWj 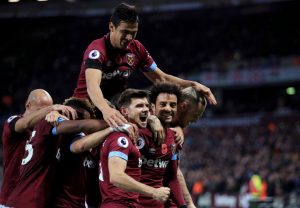 All of Liverpool’s Premier League games since the start of the season:

With 9 goals to his name, @WestHamUtd forward Marco Arnautovic is an all-time top scorer at the London Stadium in all competitions. Hero!#WHUBUR #PremierLeague pic.twitter.com/7RBCyB5VMM

Drama at the London Stadium as the hosts secure the points in a six-goal thriller#WHUBUR pic.twitter.com/pvNCAKCenI

It’s a third defeat in three games for Burnley in the Premier League, conceding 13 goals in the process, at the London Stadium. #twitterclarets #UTC pic.twitter.com/L60fCL6T97

No ‘keepers have made more saves this #PL season than @WestHamUtd’s Lukasz Fabianski or @BurnleyOfficial’s Joe Hart (44 each) ?#WHUBUR pic.twitter.com/0RndzKXUWV